The following story has appeared in many variations. The oldest published version is approximately one hundred years old, but is may date to before the Civil War.

A tenderfoot wandered into a saloon in Butte, Montana. After a couple of drinks, he announced his intent to relieve a few of the miners of any spare change they might have about them. Without much trouble the stranger found a victim who was willing to try a hand of two of poker. Luck favored the tenderfoot, and he won steadily. Finally he drew four Aces. After the stakes had been run up to a comfortable figure, he magnanimously refused to bet further. “This is downright robbery,” he exclaimed, “and I don’t want to end the game here by bankrupting you.” He threw down four Aces and reached for the money.
“Hold on!” cried the miner, “That’s my pot.”
“But, I held four Aces!”
“Well, what of it? I’ve got a Looloo!”
“A what?”
“A Looloo! Three clubs and two diamonds!”
The stranger was dazed. “A looloo,” he repeated. “What is a Looloo, anyway?”
“Three clubs and two diamonds,” replied the miner as he raked in the pot. “I guess you ain’t accustomed to our poker rules out here. See up there?” As he spoke, he jerked his thumb toward a pasteboard sign which hung on the wall of the saloon. It read:

The game proceeded, but it was plainly evident that the young tenderfoot had revenge on his mind. Within five minutes, he suddenly braced up. His face wreathed in smiles, he began betting once more with his former vigor and recklessness. In fact, he staked his last dollar on his hand.
“It’s my time to howl now!”cried the exultant tenderfoot, as he threw down his hand and reached for the money. “There’s a looloo for you: three clubs and two diamonds.”
“Hold on there stranger,”cautioned the miner. “Really, this is too bad. You evidently don’t understand our rules at all. I hope you don’t play poker in such a slipshod manner back East. Look at that rule over there.” He pointed directly over the head of the busy barkeep. There, a new looking pasteboard sign bore these words: 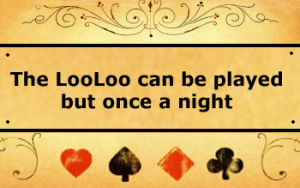